Nestled between the Design District and Midtown Miami and renamed Zero Mile Marker, this project represents the uniqueness of the intersection of parking and art, as seen through the eyes of world-renowned Italian artist Vito Di Bari and his international team of diverse artists. 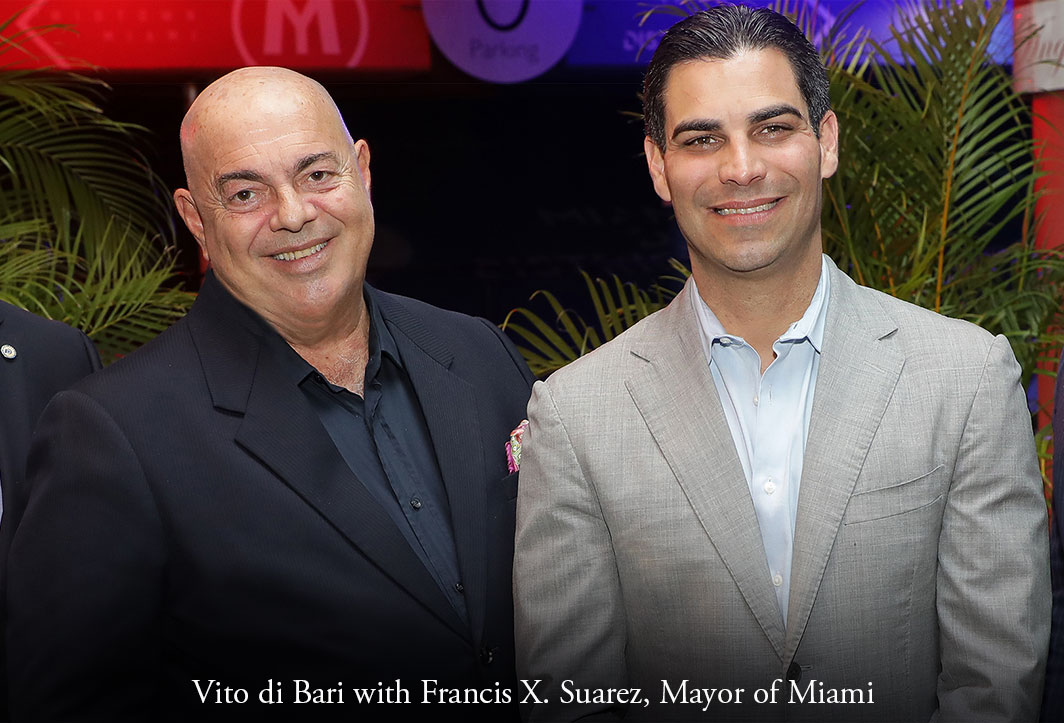 Zero Mile Marker is an oversized work of art, it’s four blocks long, 160.000 square feet of surface, including 96 columns, each of them adorned with a custom made digital painting, comprehensive of anti-graffiti protection. A slope wall (embankment) artwork (30’ x 105’) was installed at the N.E. First Avenue overpass location. Each overhead beam features the logos of the Design District and Midtown Miami on both faces. A new metallic logo “0” Mile Parking was placed at the N.E. First Avenue underpass. The diameter of the laser-cut logo sheet is 5 feet wide.

“Built under I-195, connecting Miami to Miami Beach, these underpass lots offered unlimited opportunities for a unique urban art installation. With that in mind, the MPA commissioned to re-design this space into an iconic art installation to the European firm of Di Bari & Associates, with extensive experience in aesthetically-pleasing, utilitarian concepts in high-density urban centers.” 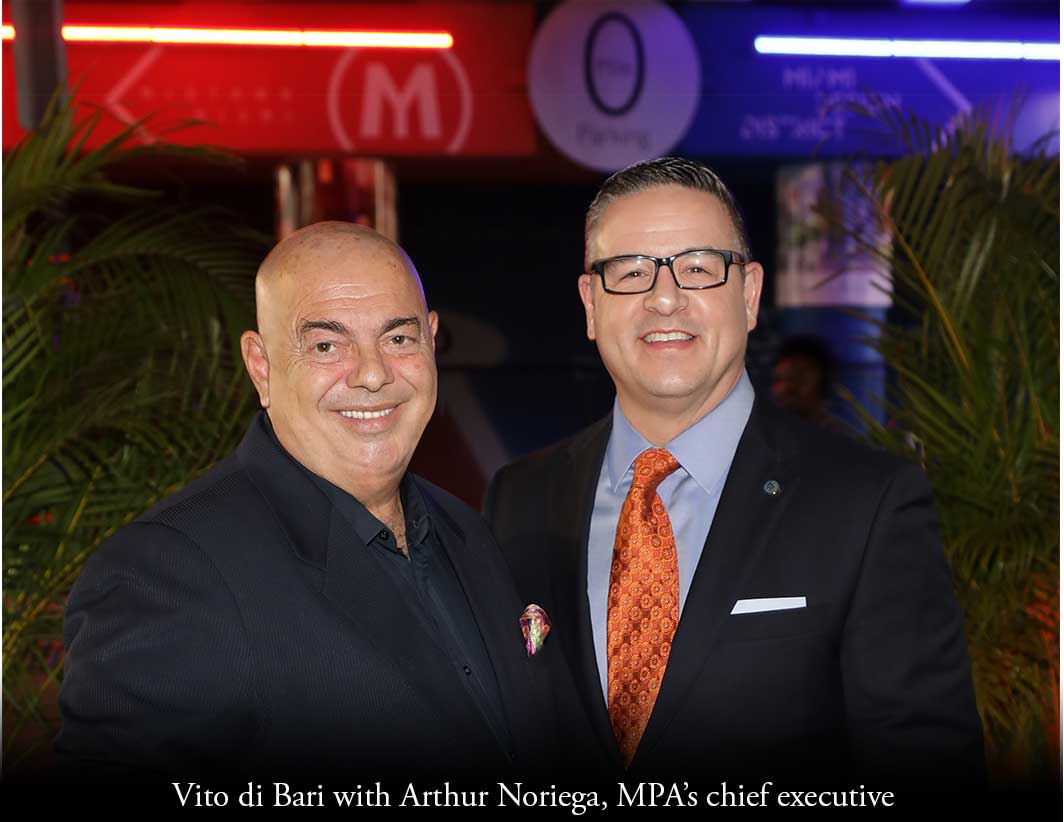 Di Bari and & Associates is the brainchild of world-renowned artist Vito Di Bari. An innovative associated studio, Di Bari & Associates is known for designing cityscapes of the future. The concept of an associated studio brings together star-artists and star-designers from five continents to deliver creative urban concepts that reflect their heritage and diversity. Di Bari has aptly named his vision “Zero Mile Marker”. As we all know, a “Zero Mile Marker” is the iconic location from which all distances are measured. The first known one in human history was located in the agora of Athens, in Ancient Greece, and over the centuries, other civilizations adopted this metaphor to create art installations as well. Di Bari’s “Zero Mile Marker” concept is inspired by the story of the Roman Empire’s Milliarium Aureum (“The Golden Milestone“). This is the literal origin for the phrase “all roads lead to Rome”, however, all roads actually originated from Rome’s Zero Mile Marker. 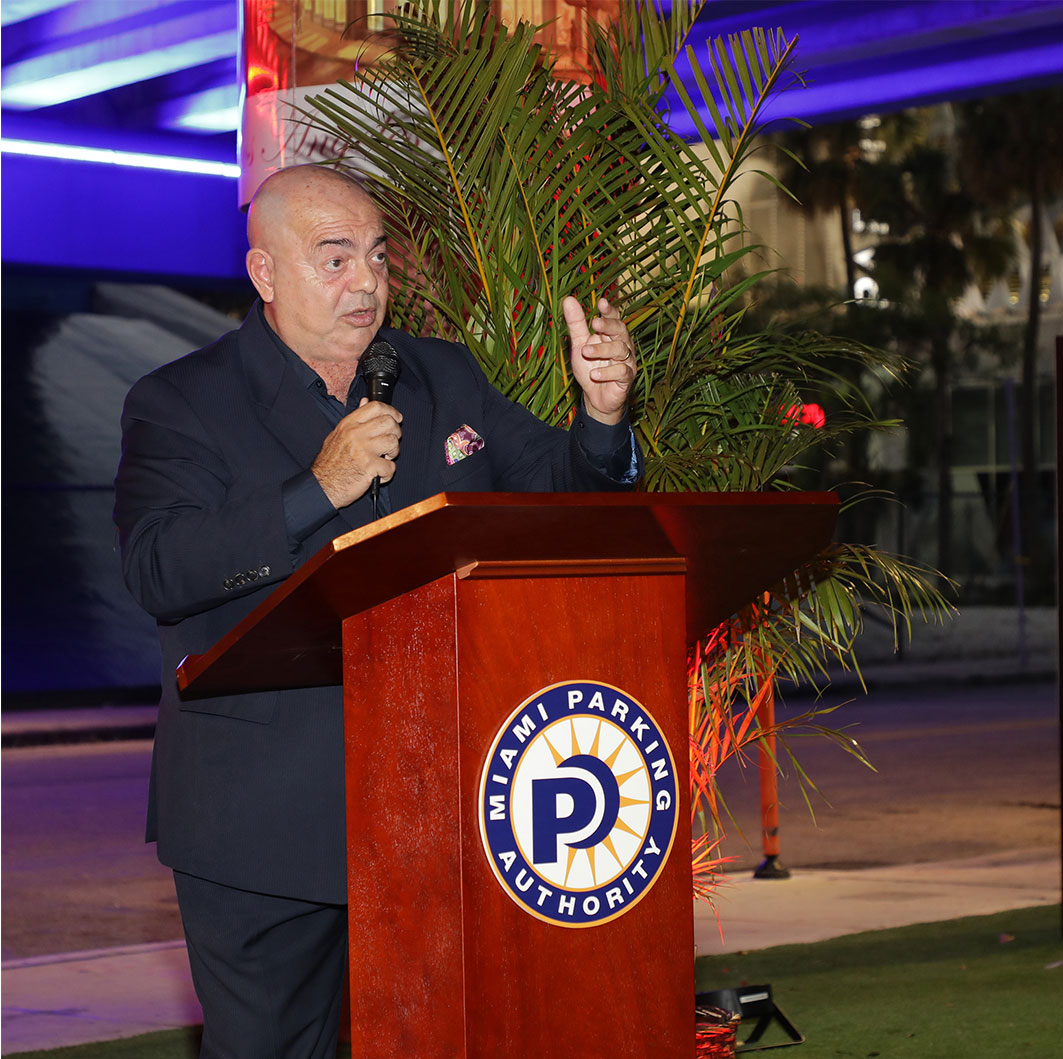 Just as the Milliarium Aureum was the reference point for the Roman civilization, I have decided to utilize the ‘Zero Mile Marker’ concept as a metaphor of the borderline between the two neighborhoods representing a sophisticated quality of life: design and culture, fashion and art, shopping and night life. I imagined the borderline of Miami Design District and Midtown as the center of a modern La Dolce Vita [the good life], both in Miami and around the world.”

His design utilizes two colors to represent each of the neighborhoods: “Deep Blue” for Miami Design District, and “Quite Coral” for Midtown Miami. There are 96 columns located in the parking lot under the overpass, and each of these columns will have an original painting of one of eight sites symbolizing upscale life around the world: 5th Avenue, New York (USA); Copacabana, Rio De Janeiro (Brazil); Downtown Dubai (Emirates); Long Street in Cape Town (South Africa); Shibuya, Tokyo (Japan); La Rive Gauche in Paris (France); Central District in St. Petersburg (Russia); Rodeo Drive in Beverly Hills (USA). Each of these paintings will be inscribed with the distance of the depicted site relative to the Zero Mile Marker installation.

The eight paintings are stylistic representations of each location and have been created by young artists on Di Bari’s team from different countries around the world: Ayan Nag from India, Roberto Gatto from Italy, Olga Tereshenko from Russia, Lucas Terra and Bianca Resende from Brazil, Sanjay Charlton from Jamaica, Robert Shirley from USA and Nikolas Lefas from Greece. 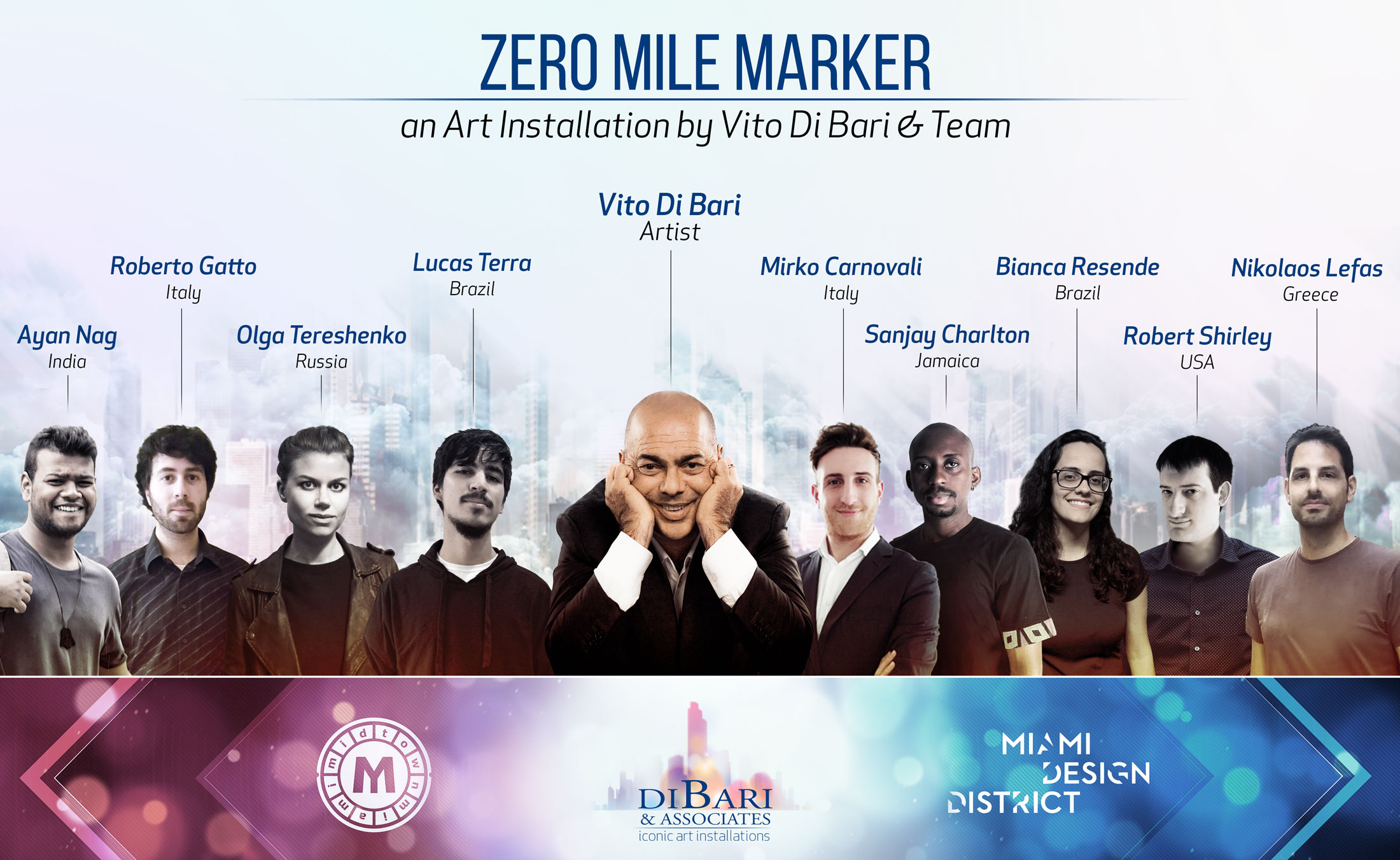 When asked about who he recruited to work on this project, Di Bari explained:

“The ethnic diversity of my associated artists is not random, as it represents the diversity of the City of Miami and it’s love for the people of the world, without prejudice.”

In formulating his concept, it was important for Di Bari to highlight diversity as a unique characteristic of Miami:

“Diversity is one of the pillars of this great city, and it is the profound spirit of this art installation, Zero Mile Marker. I have created this as an homage to the centrality of Miami inspiring the savoir vivre of our contemporary age, enabled and sustained by the enrichment coming from its diversity.”

Di Bari’s vision has been realized in 2019, a century after the “Zero Milestone” was dedicated in the Ellipse south of the White House in Washington, D.C., and was intended to be the initial milestone for all road distances in the United States. The City of Miami now has its own initial milestone for contemporary art of living and ethnic diversity.

“Art brings people together and creates a purpose. Di Bari’s Zero Mile Marker is a leading-edge concept for the parking world, we envision that this functional facility will also serve as a transformational agent that will stimulate economic vitality, meet consumers’ need for parking, bridge communities and spur economic development.”