viewers interacting with the optical artwork

Leading anamorphic street artist Leon Keer has once again succeeded in the conception of a thrilling optical sensation. One of his latest murals, a giant icosahedron sphere encased by wooden frame mounted on stairs, is a trick of the eye that appears to be a three-dimensional projection. In reality, the sphere and the stairs are printed directly onto the floor and two large walls so when positioned right in front of the artwork, it appears to be a platform protruding into space. 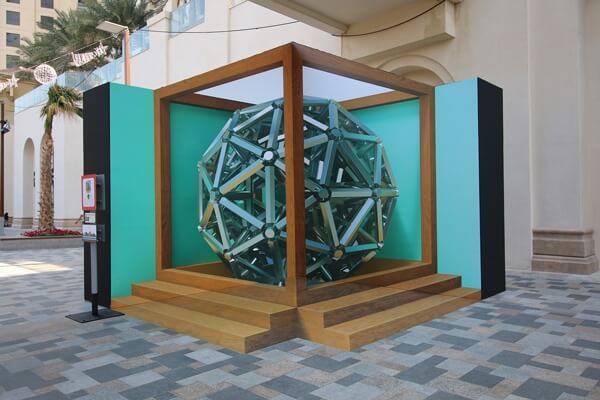 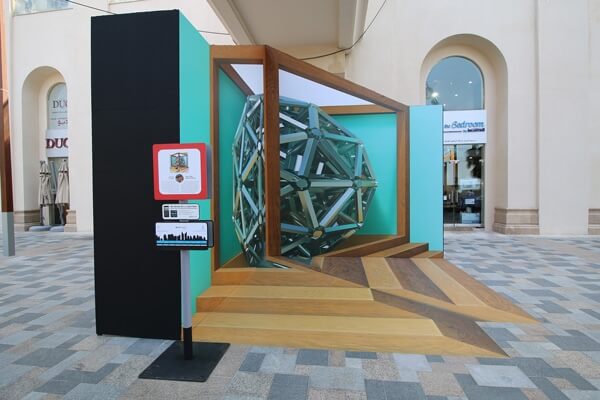 An alternate view revealing the application and assembly of the mural

Painted for the Dubai Canvas Festival in 2017, extra magic was added to Keer’s mural with the help of augmented reality. At the site of the mural, an iPad was installed directed at the artwork with an application that would activate when pointed at the sphere. The shape begins to spin, pushing the illusion to the next level. Viewers interacted with the piece by standing in front of or next to the mural to become a part of the illusion.

One of Keer’s greatest missions as an artist is sharing the joy of painting with the public. He is an advocate for street art because of its accessibility and expansive reach. Throughout his career, he has often presented his art through live-action painting or audience participation. He has said that “every street art piece is unique and belongs to the street and its residents.”

With new technologies, his work has reached an even wider audience: he has developed a smartphone application that allows those unable to visit the location of his murals to still take part in the experience. By downloading images of certain of his works such as this one, viewers can activate his murals with the application, from anywhere in the world.

Keer is a world-renowned street artist with projects all over the globe. Beyond providing visual splendor, his work contemplates important themes including the environment and contemporary living. His work is a literal play of perspective, which acknowledge human perception in ways that aim to make us rethink the way we look at and interact with our surroundings.

The murals are painted directly on the supporting columns of the above highway. Although the plain concrete surfaces and mundane surrounding activities can be dismissed as unimpressive, Faith 47 saw an inherent beauty in the cityscape and urban jungle around her. She has said, “the work I do interacts with architecture in a very specific manner, I am always studying walls, looking for buildings with character or power. I am sensitive to the style, textures and feeling of the buildings around me.” She looked beyond the market’s reputation as a danger zone, and instead concentrated on the wealth of culture and vibrancy present within these spaces.

Audience interaction with the mural and its augmented reality components