Once Upon a Time A visual play of augmented reality

The making of the mural, detail shots, and the virtual reality effects that bring it to life

Artist Leon Keer’s impressive mural, Once Upon a Time, is a work that bends time and space. Painted in 2018 for the Vibrations Urbaines Festival in Pessac, France, this mural has become an optical sensation. When viewed from a certain angle, the scene appears as a massive 3D oversized bedroom, complete with clever details including floral wallpaper, a wall clock and even a ceiling fan. However, the projection is actually an illusion, created by an ingenious application of perspective painting. The illusion becomes clear as spectators move around the 2D mural 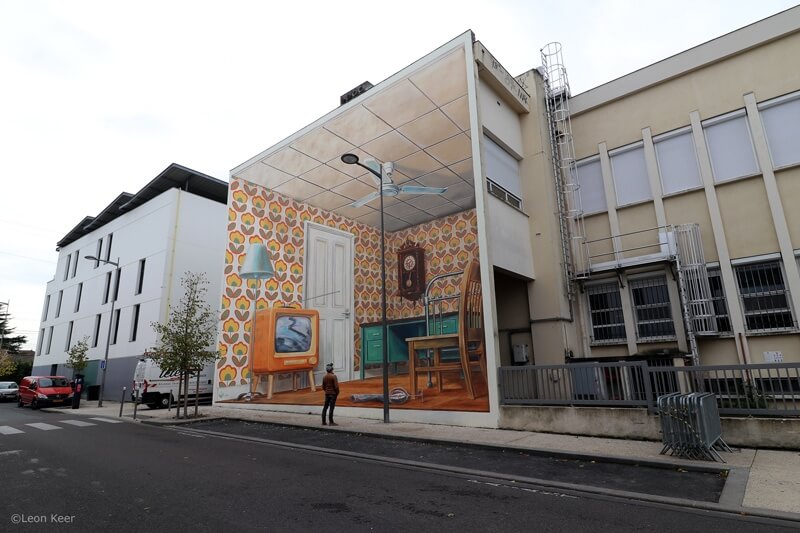 Extra magic is added to the artwork through augmented reality, where the painting is brought to life through an application available for download on any smartphone. By scanning the painting with a smartphone or tablet, it becomes animated, further enhancing the trompe-l’œil mural. The TV begins to play, the fan spins…viewers will feel as if they have stepped into the illusive room. Those who are not at the location of the mural can also take part in the experience by download-ing an image of the mural and using the app to activate the 3D animation.

Keer, a Dutch pop-surrealist, has created street art all over the world and has become one of the world’s most renowned anamorphic street artists. His objective is to seamlessly blend his artwork into the surrounding environment. He is among the pioneering artists utilizing technology to push art past traditional boundaries. Public art is accessible to all, and this mural can be experienced by anyone near and far, thanks to its technological extensions 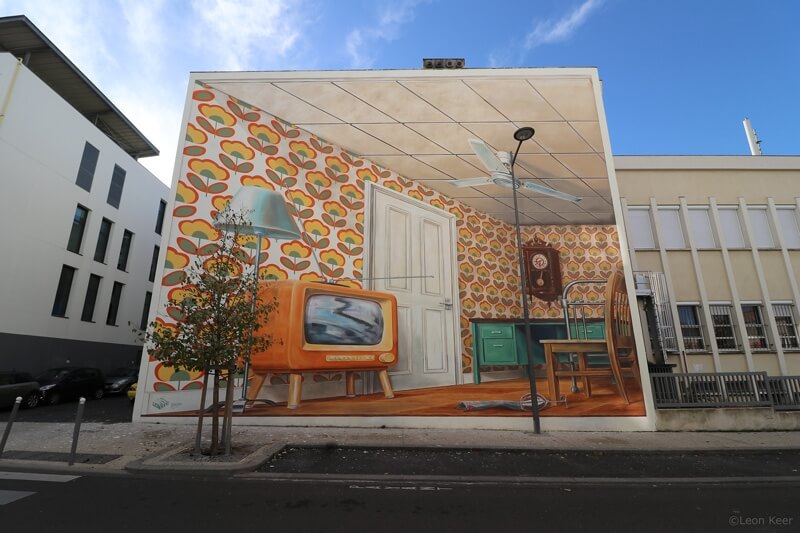 Keer’s Once Upon a Time appears to converge perfectly into its surroundings, thanks to its expertly-applied perspective

Keer is particularly interested in contemporary themes that pertain to the environment and ad-dress questions of livability in this world. The mural is playful yet contemplative, the outdated interior eliciting nostalgia for past decades. The kitschy design of his giant bedroom is a playful reminder of the aesthetic and technological changes that have taken place throughout our con-temporary era. Keer is constantly aware of conditions of beauty versus degradation, an ever-present paradigm of urban life. The amplification of the interior scene acts as a powerful symbol for home, community, and living practices in our present-day society.

Though a form of immortality for his creation is ensured through its digital footprint by way of social media and the global sharing of his artwork, he declares that his work is meant to be a transitory offering reflecting a current state of life. He says: “Every street art piece is unique and belongs to the street and its residents, the temporary fact about this art form strengthens its exist-ence.”