Descending from the heights of the SKC sports arena, Gabor Szoke’s “Snow Leopard” is truly engaging the public eye. The magic of the piece derives from its dynamic interaction with the building, instead of simply standing or sitting next to the arena like most public metal sculptures of its kind. As an urban art designer, Szoke is second-to-none in his ability to consistently deliver epic pieces like “Snow Leopard”. The artist has an unsurpassed command of the media he uses, wood and stainless steel. His young, vigorous energy has been injected into towns and cities around the world, this beast is one of many amazing examples. 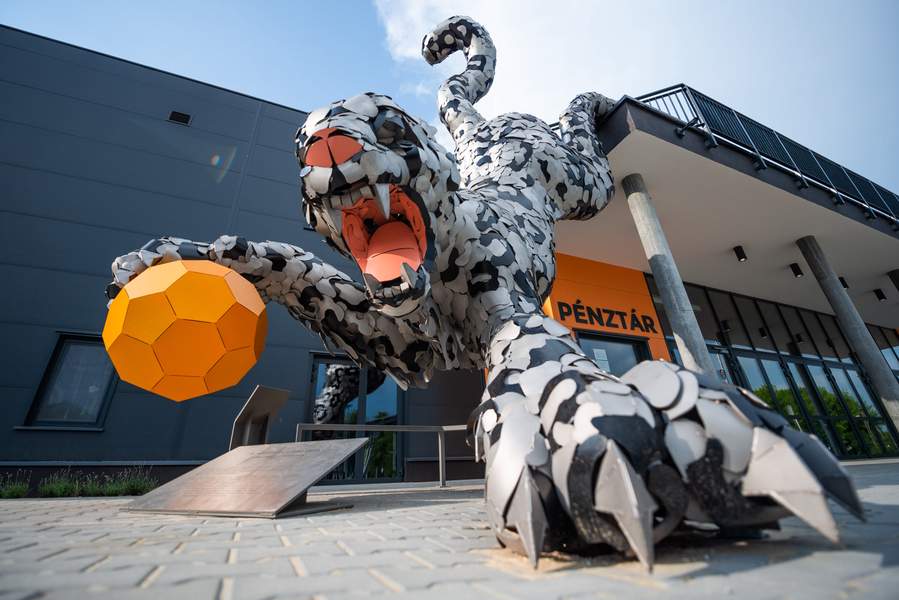 SKC intimidates their rivals on the court, while this public metal sculpture exudes power off of it.

Hungarian women’s handball team SKC (Siofok Kezilabda Club) from Siofok commissioned the big cat to boldly adorn the entrance of their arena. The design for “Snow Leopard” is not just visually impressive, it was executed with consideration for the site-specific needs of the town and team. The building itself supports the hind legs of the big cat, while the ideals of the team and the nation of Hungary are also encapsulated by the enchanting art piece. In Hungarian mythology there is a snow leopard named Bors who chases deer through the forest. This kind of reference to a country’s cultural heritage is usually warmly welcomed by locals to be included in public metal sculpture, or any art in public places. The management of SKC knew this and that’s why after their initial commission for a sculpture, expanded their request to include other design aspects. 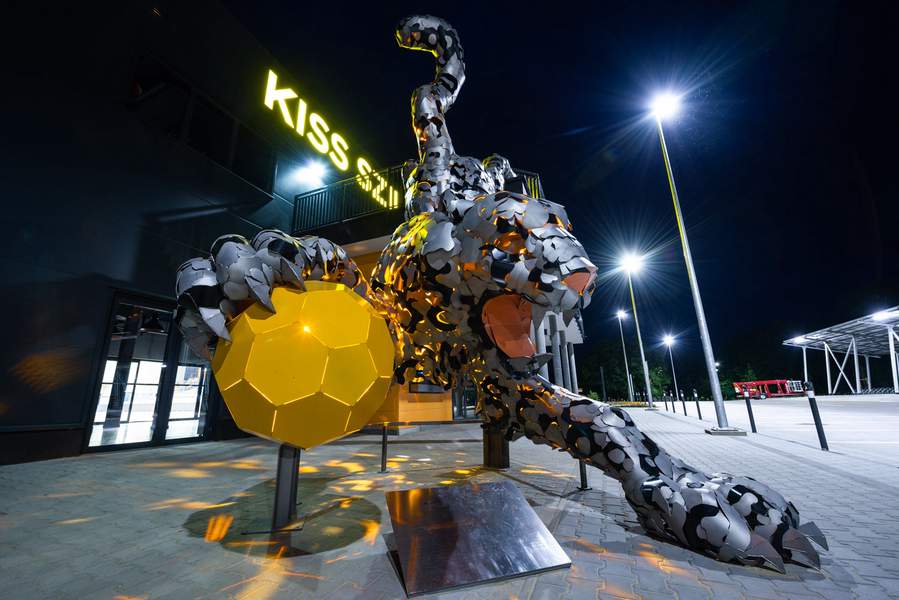 At night, the public metal sculpture takes on a different, perhaps even more striking look.

The sketches and idea behind “Snow Leopard” were full of such thought and beauty that they requested a full update of their branding. As is the case with any sports team, the mascot is the face of the organization and one of its most important design elements. The tall task of creating a new mascot was entrusted to Gabor Szoke who delivered a real hit with the local population.

“The snow leopard was incorporated into the team’s logo and together with my team we re-did the interior design of the new building, including everything from the wall paintings to the fan shop to the mascot. I wanted to create a mascot for the Siofok Women’s Handball Club, which embodies strength, femininity, and which also has some Hungarian historical connotations”